Just wondering about this ...

The FBI has just newly released*  'never before seen' photos from 9/11. It is on Twitter and social media as well as many media outlets, few of them MSM.
Seems like a long time to make a decision like that, considering that they took away over 200 surveillance tapes from local area businesses on the day. And finding out that the Pentagon's own hundred or so cameras were not working or were (mysteriously) shut off on that day. And then the agency only showed us 4 frames of something blasting into the Pentagon on 9/11.

Many will suspect that someone in a US government agency had plenty of time to Photoshop anything they wanted into any pics. But there are still no wings, no tail section, no fuselage, no luggage, no engines strewn on that Pentagon lawn. No dead BODIES! And no belief anywhere that even the best pilots could have flown like a Tom Cruise Top-Gun Air Ace, never mind ANY pilot from al Qaeda or any other terrorist group.
However, a cruise missile (no pun) or an armed Global Hawk is another thing entirely ....

Have a look at these, anything odd to you? Like in this aerial view, we see that whatever smashed through the first (outside) building, seemed to get through the second building without a trace, and then resumed its destruction on the third in line building. Which, is effectually through the 6th reinforced concrete wall. Hmm?


I thought I read somewhere that there were LAWS of physics. ??? 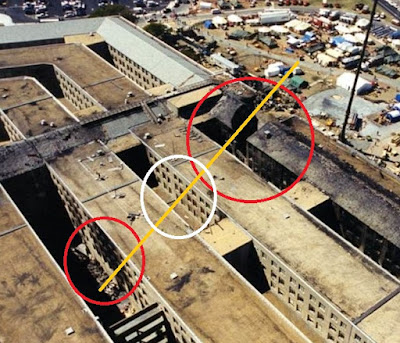 Seems incredible to me, but there are certain engineers who will use the same logic from WTC 1 and 2 to explain. They said then that the already burning jet fuel ran down 110 floors without being absorbed into the concrete, without burning out, and caused molten steel to be still burning in the basements four weeks later!
So those same spinner engineers will tell us a missile OR a whole 737 could somehow wiggle through the second Pentagon layer building without damaging it, yet burn the third. Sure, tell that one to Einstein.

Meanwhile most skeptics will continue the scrutiny of new releases of information or photos from that day. From whomever releases them. All these photos are harmless, show nothing new and are basically irrelevant.
The only thing is when you read the captions, the comments and info seem to be doing nothing but still trying to convince us that a passenger plane full of people, piloted by crazed Arabs with super-hero skills, crashed on that day. 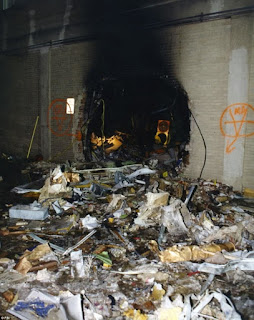 Nice lil round hole. No Boeing junk. They explain any other holes in Pentagon walls to explosions caused by heat. Hmm. They did find some scrap metal parts of damaged fuselage from an American Airlines plane. But none scorched and all on that famous lawn that didn't burn. Must be rubber to bounce this far from the scene .... 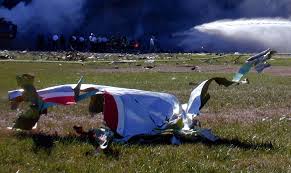 Here is a more revealing photo from that fateful day, which although whatever is under that blue tarp is covered, exposes a lot more than intended ....if it is passenger plane debris, WHY would it need to be covered?


Why? Maybe because it is the identifiable remains of a Global Hawk?

Is it under that tarp for the same reason all that WTC 1, 2 and 7 steel went to China in the immediate hours after the demolition? Get it the hell out of here? Someone might find residual thermite?

This ain't over yet.


*newly released - - - FBI spokeswoman Jillian Stickels said the pictures were first posted online in 2011. But a technical glitch caused them to disappear from the site for an undetermined period of time, she added. They were restored in recent days to public view once the FBI learned they were missing, according to the FBI spokeswoman.

Are these really the untouched original photos?