IBM vs iPhone vs Blackberry

More reasons to encourage the use of Blackberry smart phones.
Blackberries are good. Apples are bad?
Evidently IBM doesn't trust Apple's iPhone.
They believe Apple's Siri,  is sending and compiling information from Apple users.  'When you use Siri or Dictation, the things you say will be recorded and sent to Apple in order to convert what you say into text,' Apple says. Siri collects a bunch of other information - names of people from your address book and other unspecified user data, all to help Siri do a better job. Yeah right.
Hmmm.
See for yourself - - - http://www.cnn.com/2012/05/23/tech/mobile/ibm-siri-ban/index.html?eref=mrss_igoogle_cnn

Of course this only adds more credibility to my previous post about the conspiracy to kill RIM.
Read it here - - -  http://bitchesnbelches.blogspot.ca/2011/10/researching-motion.html

Can Big Blue be wrong?  I usually don't trust them either, but when even they are worried about the suspected privacy actions of a competitor, I tend to listen.

Posted by HelloWall at 8:33 PM No comments:

The Drones are coming

Drones are being allowed in American airspace.
What does this mean?
Let's see ....
You already know what the military does with drones in Afghanistan, Iraq, Yemen  and probably several other countries. They are used for identification, surveillance and targeting of potentially hostile elements. The thing is, the drones used in these foreign operations are flown by regular US military pilots who do know what they are doing.

Recently, the US has allowed drone testing in 59 areas around Denver.  Each about 20 square miles. One of these wayward drones nearly brought down a corporate jet, a Cessna flying at 8,000 feet over Denver. Some analysts have suggested the near miss was as close as 170 FEET from the jet! These particular drones are being tested by the University of Colorado’s Center for Unmanned Aircraft Systems, which has FAA authorization.
This testing is being done because there is a congressional mandate to open U.S. airspace to drones by 2015. The FAA has announced procedures to  streamline the process through which government agencies, including local law enforcement, can receive licenses to operate unmanned aircraft at altitudes no higher than 400 feet. This applies as well to commercial and civil drones.

Scared yet?
Why Denver, the mile high city? Well let's see, if you test in the desert, 400 feet is not very high, but around Denver, you are already way up there, flying at a mile high plus 400.  ALL citizens of Denver are members of the Mile High club.
And if you've been keeping up, you KNOW there are all kinds of weird and wonderful things about the new Denver International Airport. Like what was built beneath it in complete secrecy?  Like why did the budget go from 1.7 billion to over 4.8 billion. 3.1 over! Why are there 8 underground levels?  Etc etc.
But back to the drones.

Once they have rules established, the FAA expects as many as 30,000 drones will be in American airspace in the coming years. And it has already been reported that drones operated by the police in Texas will be equipped with weaponry. It's just a matter of time, isn't it?

Fox News contributor Anthony Napolitano boldly predicted, “The first American patriot that shoots down one of these drones that comes too close to his children in his backyard will be an American hero,” and others have wondered if this makes a frightened father a patriot or a terrorist?
Public safety agencies can now get expedited permission to fly drones weighing up to 25 pounds in U.S. airspace. Some exist at 4 pounds too! Notice they are calling them 'public safety' drones. Considering that some satellites can read the writing on your golf ball from space, these lil' gems will be able to see EVERYTHING you are doing, even under your roof with the shades down in the darkness. Did you forget about motion sensors and thermal imaging?
Nice that the government is looking out for us, isn't it. But have innocent people been targeted for 'suspicious' behavior?  Depends on who is doing the suspecting, doesn't it.

Meanwhile, sharpen your marksman skills, these little mosquitoes will be hard to hit.

Posted by HelloWall at 6:17 PM No comments:

facebook has about 900 million subscribers worldwide.
There are about 300 million people in the United States. So for most subscribers in America, that means almost everyone is signed up except the Banjo Boy from Deliverance, that old kid suckling on the Time Magazine cover, and my senile Gramdpa who wants to use the Web to find his teeth.

Mark Zuckerberg, the owner of facebook, (correct lower case "f") is about to send it into public trading. His personal net worth is estimated at 24 billion dollars. That's BILLION! The value of the social networking site is guestimated to be valued at about $100 billion according to a Wall Street Journal report.
At least once a week, those nine hundred million people around the world use facebook. The site's revenue grew from $777 million in 2009 to $3.7 billion last year. And in the first quarter of 2012 it was more than $1 billion!

So who are these people participating so willingly in this Great Deception?
Half of the Baby Boomers - the generation born in the years after World War II - have an account. And most of the 56 per cent of the country that’s on Facebook is young  -  two-thirds of Gen Xers and a huge 81 per cent of people 18-35 use the social networking site.
Conversely, it’s the rare senior citizen on Facebook. Just 21 per cent have signed up. One would like to think that us old folks have an inbred suspicion of someone who wants all that information about us. But it is more likely feeble fingers left over from the Great Depression.

Let's look at the information available on facebook.
When you sign up, you tell them; when and where you were born, (most police departments use DOB to differentiate one Mr Smith from another)  who your parents were, your mom's maiden name, where your family came from, where you live now, where you used to live, where you went to school, who your friends are, what you like to do, where you like to go, who you like, who you hang with, what you eat, what car you drive, what religion you are, where you work, shop and play. (take a breath here) who your family is and was, exactly what you look like right now, and did in the past. They even want to know what your dog was named when you were 10!

You no longer need to be captured by the CIA or the KGB and grilled or water-boarded for 72 hours for incriminating information. You have gleefully already provided it!
The privacy issue is the thing. Three of every five facebook users say they have little or no faith that the company will protect their personal information. Only 13 per cent trust facebook to guard their data. Even facebook’s most dedicated users are wary - half of those who use the site daily say they wouldn’t feel safe buying things on the network. But lately even the advertisers are saying no one clicks on their ads.

But it is not about purchasing from their advertisers is it? It is about surveillance of everything you do, and everyone you know.  When Homeland Security came into being, with it's accompanying Patriot Act, the FBI and other certain other government agencies recognized the fact that the web had the greatest potential for eavesdropping and eventual control of masses of people. The demographics were perfect too.
Who cares about those oldsters who went through a war fighting for country, peace and liberty? They're naturally suspicious of power anyway. The people who could become the threat to the powers-that-be are all standing there like lambs waiting their turn for the hammer. Sign me up. I'll tell you anything. And so they do. And Maxwell's Silver Hammer came down upon their heads.

And today there are whole stealthy corporations working for these government agencies who have bot readers, chat listeners, cross-referencing software, email filters and face recognition programs listening, reading and looking at you and your friends and working 24/7/365. And because YOUR ISP number goes through your server and even your computer has a unique hard drive code number, all YOUR info IS being read and noted and because the Patriot Act says so. And no company you deal with who has that information can NOT reveal it to the government.  It is the New World Order law. And without a search warrant, and without telling you that you are being watched or investigated.
There is not a police department in North America that doesn't use facebook for information. And most corporations peek into it too before hiring or dealing with you.

Match all this with Google Earth and Street View, and your front door is right there, directing anyone who cares, to your exact home. Do come in. Nice red door, matches the geraniums on your porch. 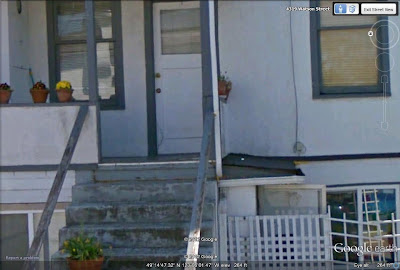 And all because you posted that your girlfriend looked like a BOMBshell in that red clingy dress! The word-trigger clicked in and you may now be on a no fly list.
Never trust anyone who makes one billion dollars in three months.
Technology is wonderful, yes?
Well yes?

Posted by HelloWall at 7:42 PM No comments: