You'd almost think that the Blackwater corporation, now known as Xe, the company that has a controversial private army in Iraq, is being protected by someone.
Remember every single TV cop show you ever watched when they apprehend the bad guy, and they say this? - "Anything you say may be taken down and used against you in a court of law ..."
Evidently that's exactly why a federal judge dismissed manslaughter charges against five Blackwater security guards in the 2007 deaths of Iraqi civilians in a Baghdad square, finding that prosecutors wrongly used the mens' own statements against them.
Huh?
After the firefight, the Blackwater guards were questioned by government investigators about the incident. And it was construed by the federal judge that they might have been in fear of losing their jobs and therefore their statements were not allowed as evidence.
Each of the former guards faced 14 counts of manslaughter, 20 counts of attempted manslaughter and one count of using a firearm in the commission of a violent crime. A sixth guard pled guilty.
Blackwater/Xe is the same company that, during hurricane Katrina, stopped US citizens at gunpoint, from reaching high ground and safety in the turmoil of that tragic situation.
So, do the writers of TV shows now have to say; "Nothing you say will be used against you, we promise."
Or is this recent ruling only for a company that many think of as a rogue organization protected by the State Dept, NSA and the CIA?
Posted by HelloWall at 10:55 PM 1 comment:

Whatever the Braidwood Inquiry findings ....

it still remains that an RCMP officer, when Robert Dziekanski was down after being tasered 5 times, laid his leg across the side of Dziekanski's throat and cut off the blood supply to his brain. THAT is what killed him. That is what they don't want you to think about. Any school child knows that someone will die in seconds by this. He was not dead from the taser, he died from a policeman's full

weight across his throat. My opinion and the opinion of many, including Paul Pritchard, the man who actually took the video.
What I would like to know as well, is who was the actually person who INSTRUCTED that security man to go and stand in FRONT of Pritchard's video camera to try to block him gaining evidence. That guy should be charged with something TOO!
All in all an attempted cover up and continued blocking by our RCMP
creating a shame out of an already tragic situation.
Posted by HelloWall at 10:37 PM No comments:

Links to this post
Email ThisBlogThis!Share to TwitterShare to FacebookShare to Pinterest
Labels: RCMP cover up, Tasering, video 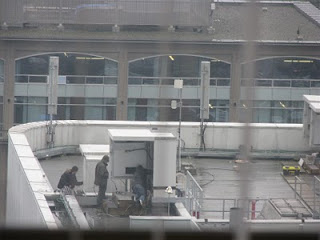 Installing the electronic watchers that will keep track of Vancouver people.

What's in YOUR wallet?
Do you have an embedded chip in your credit card? A new driver's license with the chip? Gone to a major sporting event and had YOUR face recorded by face recognition software?
Posted by HelloWall at 8:37 PM No comments:

Links to this post
Email ThisBlogThis!Share to TwitterShare to FacebookShare to Pinterest
Labels: 1984, Big brother, RFID chip, triangulation, watching you

This is a five ring circus. No elephants or unicorned horses. No monkeys riding dogs, but a circus just the same. In the main ring is Gordon Campbell with John Furlong as the Ringleader ... er Ringmaster of VANOC.
He has the whip and chair but has no fear of tigers and lions, because the whip is for the people and the chair is for Gordon to sit in and watch as the people are beaten into submission. These two are so afraid of failure or embarrassment that they sneakily pull away your human rights and overrule the constitution of Canada.
The cameras are going up on buildings, the sensors being tuned, the so called integrated Security Unit wearing the traditionally intimidating black suits is visiting dissenters, legitimate journalists are being harrassed and interrogated, and the freedoms that we take for granted are being removed, all in the name of 'The Games'.
Watch over your shoulder, guard your phone messages, find out the keywords, listen to the voices, tread with care, 1984 is a little late, but it is here right n
Posted by HelloWall at 9:17 PM No comments:

Call out the Army!

Bud Mercer, head of the RCMP's Vancouver 2010 Integrated Security Unit, has announced the end of free speech as we know it in Canada.
The budding mercenary said there will be 'Free Speech Zones'. There will be no protests, talks, or placards with anti-Olympics messages allowed outside these designated areas. And the army will be here to enforce it. Is this actually inciting protest? Where would these zones be? In the Central Park forest? The dikes along the Fraser River? Perhaps somewhere in the West Kootenays?
Bud Mercer is the same guy who is sending mysterious men in black to harass anyone now who voices concern. And he has 4500 soldiers coming to make sure no one speaks out. They also plan on herding the homeless out of town. Maybe in boxcars? Oh no, wait, that was in Nazi Germany. How did the Chinese do it in Beijing? Oh wait, that was in Communist China.
This perception of a threat by the ISU is curtailing our rights to free expression and free association. There will be thousands of surveillance cameras watching everything you do. Security officials gathering intelligence on potential threats. Oh wait, this is Canada, a shining example of democracy and freedom. Isn't it? It couldn't be all that bad. Could it?
One wonders if these actions by already heavy handed enforcers will result in some sort of backlash and even some interest by regular people as Vancouver descends into a police state.
And one almost assumes this kind of suppression of democracy in Canada will actually encourage the organization of protest groups. That is if the famously placid Canadians even care about their rights and freedoms.
They don't want protests like Seattle had during the WTO meetings. Well many people began learning about the World Trade Organization because of those protests. And many now believe the WTO has no rights to over rule countries, yet it is now happening.
Who knows what VANOC is starting by over ruling Canadians' fundamental rights?
I think this is going to heat up, perhaps at Army gunpoint.
Posted by HelloWall at 8:45 PM No comments:

People are talking about Journalism 2.0 lately.
This is partly a theory that journalism as we knew it is now dead. It has to do with the modern media, TV news, newspapers, radio news. These sources for your information seem to be unreliable and untrusted. The news you get from newspapers is now almost 3 days old when it is printed. And they often quote news from TV or even weblogs! TV news hours fill up with anything but real news. Looking for 'stories' to tell within a time frame. Entertainment at 6.
A recent study of news information revealed that most of the younger generation get their hard news from, of all people, Jon Stewart on the Daily Show. Walter Cronkite died and news trust died with him. Journalism 1.0 is no longer supported, like that old Commodore 64 in a land fill somewhere, it is trash.
Most hard news outlets are conglomerates owned by a very few powerful people. A little research will often tell you exactly who owns them, and a little more reading will get you the slant of that owner. A little scrutiny will even tell you HOW the affiliated stations will report news. Do we really need to watch Fox news for their slanted and often doctored views? What is widely viewed to be propaganda! So why do we want to pay attention then? Of course the research this generation is doing is on the World Wide Web.
Aha. That's it isn't it?
The reason people are discussing Journalism 2.0.
News now comes from people posting items on the web; in forums, blogs, Youtube, social networking sites like Facebook. Yes, opinionized it may be and there is a lot of chaff and misinformation, but a keen mind can separate that from DISinformation as practiced by certain organized media. Do we believe the antics of Rush Limbaugh and Glenn Beck masquerading as news commentary? Jon Stewart and Steven Colbert are on the Comedy Network, they go for the laugh, and yet through the humor we discern truth. Salon.com regularly scoops the major news organizations. Wolf Blitzer fumbles through a program trying for seriousness yet seems to be a victim of news technology! CNN ratings have plummeted. Newspapers can no longer take the time to verify their stories in the competition with a Youtube cell phone video of what just happened.
Journalism is freer now that we, the people, can post stories and items and video about what WE saw. Anywhere and anytime in the world! We no longer need the trained reporter who can perhaps write better, or a videographer who gets the better angle and the glistening tear, all edited for a timed segment of the Six O'clock news (entertainment) hour.
The face of journalism has changed and the real eloquence is in the spontaneity of the report, whether it be from a shaky unfocused cell-phone camera or an ungrammatical posting on a blog.
Journalism 2.0 is here and we all have a tremendous new power. We are reporting to each other now.
We need only to expose the truth.
Posted by HelloWall at 8:43 PM 1 comment:

Forum - have your say

Posted by HelloWall at 8:31 PM No comments: