Watching the skies ... then and now 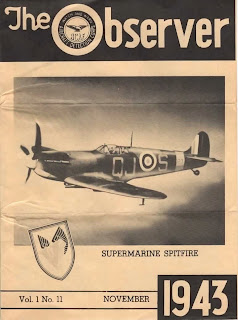 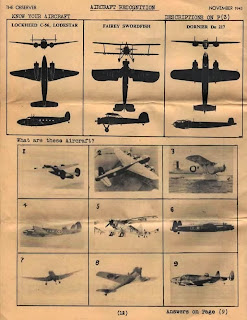 Used to be, one of the nicest things you could see in the sky was a hawk circling over a grassy field, looking for his meal.
That sky watching became searching for dangerous aircraft during war and in 1943, the English Homeguard needed to identify planes over the English countryside, so the Observer issued pamphlets like this. The Spitfire was a thrill in its beauty and purpose but most will never see one again, (unless you are watching Foyle's War on British TV.) And there was no point in identifying a V2 and calling someone because it would already be there before the call went through. Of course there's really nothing romantic about war and that was then, this is now .....

Dutch designer Ruben Pater came up with this modern chart of attack and surveillance drones. 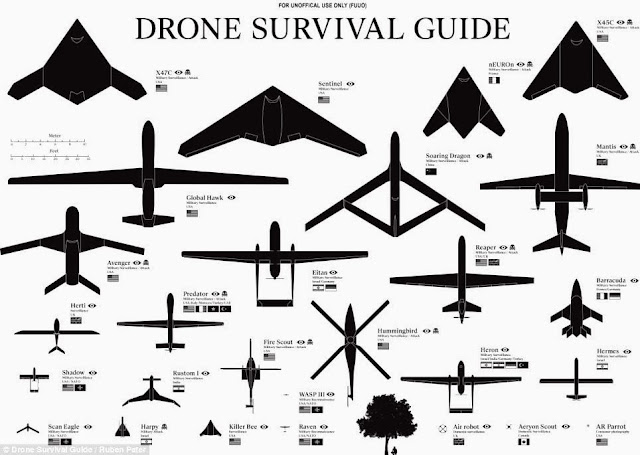 Our ancestors could spot natural predators like hawks from afar by their silhouettes. We may need to be also aware of the present day predators. Spies looking for more than a meal. The Federal Aviation Administration (FAA) predicts that within 20 years there could be 30,000 drones flying over U.S. soil alone. As robotic birds will become commonplace in the near future, we should be prepared to identify them.
Aside from the practicality of using drones in distant wars where the pilot sits in a comfortable facility in his home country, oblivious to any danger,  while his Unmanned Aerial Vehicle (UAV) hunts down and kills those who are perceived to have a threat to our society, there are now hundreds more uses for UAVs.

From peaceful uses like mapping terrain. Checking out building sites too dangerous for a man. A local police force observing a robbery in progress, to privacy infringing uses where a tiny silent drone looking like a dragon-fly hovers near your bedroom window to peek at you, to the use of a Reaper Drone or a Global Hawk to attack the Pentagon, observed by 214 surveillance cameras but only 10 frames released to the public.


Is there a subliminal threat to society looms in the skies with those drones? Recently a Colorado company, who makes drones approved by the US Government, was assisting in surveying flood damage, a useful operation. They were ordered by FEMA, to ground their UAVs and anyone flying one would be arrested! No one has explained why.
Well anyone in the know is already aware that something sinister is going on in Colorado that someone doesn't want you to see. And that's just the beginning.

The future is now, keep watching your skies, just don't shoot down a real hawk, they're just looking for a meal.

Posted by HelloWall at 8:50 PM No comments:

Of course you know the world is changing, on the net especially. Google, Microsoft and Apple seem to me, to have sold out to the government agencies. (Even though those high tech companies have banded together to try to sue the government into letting them TELL you they are being controlled) You may need to to a little research on your own and look up FISA and FISC Court to enlighten yourself.

On your smart phone, you know that the 'phone', knows exactly where it is at any moment. GPS locating within a foot or two! And it can hear everything you say, and see everything you do. And read and record everything you write. And relate back to an observer exactly where you have been! And when you download a cool App, that will allow you to play a simple game, for instance, you give that App permission to watch everything you do. Not only that, but you give it permission to take the details of ALL your contacts and other information and use the data for whatever purpose. They know who all your friends are. Every person on facebook who ever clicked on you or follows you on Twitter.

So now with Windows 8, you can also get many Apps, from the Microsoft or Google Store, to play games or do productive work on your computer, or to simply entertain yourself. Beware, those Apps are the same as the phone Apps, and you give out the same permissions to strangers to invade your privacy. To see everything on your computer too, every picture of every person you know! Of course you know already that your digital camera embeds all the data of that picture within the numbers. Who took it, where, and when.

Remember when you bought the software on a CD? And loaded it onto your computer and no one knew anything about it. It was yours to do whatever you wanted with it. But under the mask of fearing piracy, Microsoft and others now keep the control and knowledge of who is using their software in their own 'cloud'!
BTW, the cloud use is plunging because no company will trust their private information to a leaky sieve in another company.

Do you think it is going to be like Russia or East Berlin? Don't kid yourself, it'll be way worse than that. Are your children getting good grades? Are their aptitudes being sent over the web by the education department? Do they really like art or music but might be more suitible for a technology career? Is a REeducation department going to be making that decision for them? The future is nigh.

The coming technology to be used against you will include voice-prints unique to YOU, and listening technology that can hear you whisper inside your bedroom from miles away! They already have facial recognition and YOU are probably already in that data-bank! We know the FBI can turn on your web-cam without the little light to show you it is on! And the NSA is siphoning virtually ALL the data going anywhere on the web. These kinds of leaks don't come out unless they've already been doing it for years!
And now there are reports of cameras hidden inside your smart TV, behind the screen! Watching you!
"We only want to know what channels you're watching," they say, while the guy behind them in the black hat nods agreement.
And have you noticed that the new laptop computers no longer have a removable battery? Is that so you cannot shut off the power supply so your meta data is still able to be transmitted? Without your knowledge.

And the government and law enforcement drone programs are ramping up so you can expect to see a drone patrolling your neighborhood in the immediate future. Yes, the very same drones that take out Pakistani or Yemeni 'bad guys' plotting against someone. And drones are capable to locking on a target and watching it for days! The target being YOU! And their batteries can be recharged with a laser! Allowing them to stalk you for perhaps weeks!
Shoot them down? The populace has guns. How many in that fringe populace are sharpshooters? The see-all drone will notice when you walk out on your porch with a long rifle. Don't the gun owners know that these dark forces already have them pinpointed? Innocent gun club people and deer hunters are not safe with any weapons.

So we've already seen those old WWII pics of people being transported on train to 'detention camps', but there's no need to ship you anywhere, only to pick out the trouble makers and contain them. Even small town police forces have SWAT equipment and armored riot vehicles. And FEMA, which is supposedly there to help you in times of emergency, has bought millions of rounds of hollow point ammo!
Homeland Security is securing the homeland, but for whom?
Is anyone noticing how many high military men are being removed from command? The problem with taking over a country is that the unknown quotient is who of the military will actually fire upon their own citizens if those people wake up and are forced into mass protests? Kent State will be like a Maypole party. Preparation is to remove those in suspect mode of not following orders. Maybe patriotic men.

And it is becoming increasingly evident, that whatever party, left or center or right, from fascist to communist, or whatever ideology they pretend to have, has no control whatever on the progression of this shadow government and their dark agenda. So if it's Bush or Obama, Chelsea Clinton or Mary Cheney, take your pick and spin the wheel, all the stops are at 'Bankrupt' anyway.
Don't shoot me, I am only the messenger. Unarmed.
But wait, information is armament isn't it?

You notice I have not used the word terrorist yet, maybe it's because I don't know WHO the actual terrorists ARE!


Posted by HelloWall at 9:10 PM No comments: