Evidently Outlook doesn't mind if you contact those pretty young girls, looks like it is even encouraging it here? This is what comes up when I close an Outlook account after reading my email. An invitation to start a Skype conversation with a cute blonde.

Parents everywhere are frightened out of their wits about their children being preyed upon by web stalkers. So what is this all about? Don't ask me, ask Microsoft, they're the ones who changed Hotmail into Outlook. Now they want to connect your Twitter account to Outlook. And any or all of your other social media accounts.

Makes you wonder why, doesn't it?

Here's why? Because the powers behind the scenes want to track you better, so connecting your Twitter etc. with your Outlook accounts, makes it a little easier for cross-referencing. And the more people on Skype, allows the NSA et al, to use PRISM's facial recognition software to add YOU into their database. In that secret huge new center in Utah. Now you know why Microsoft bought Skype for 8.5 billion when there were no other bidders, and ..... here's the big one, who installed the rogue code of spyware onto it almost immediately.


But are they using young blondes as bait-girls? Hmm, you decide exactly what is being encouraged here.

Send Tweets from the People pane when you connect your Twitter account to Outlook.com.
Connect your accounts

. . . So you can coordinate and contact a girl on Skype and perhaps see her, write on her Facebook wall, message her on Twitter, there's even a pop-up dialogue box inviting her to the beach with you! You get her personal email address and even her Seattle home town with zip code!
Scary, huh?

Or maybe it's just the NSA wanting to see if you're a dirty old man?

Posted by HelloWall at 5:43 PM No comments:

So the Federal Government is saying they want to help out the middle class. Just because they care. And the CRTC, Canadian Radio-television Telecommunications Commission, has somehow been holding back Canadians from getting what they really want in cable TV viewing.
Of course we all know all this and presently, you may be getting the Essentials set-up from your cable provider, or perhaps the next level up, a Medium assortment.  It is the norm in cable business, but it seems to be in favour of cable companies and channel owners to all make money.
And the latest studies conclude that the TV viewing public (middle class) is gravitating AWAY from cable television because of ineffective bundling.

The fly in the ethereal ointment is that the cable companies bundle everything. You might get the  network TV channels, news channels and some local channels, but anything else you want, will come at extra cost. And this is what the buying public doesn't like.
If you want Speed or HBO, for instance, you'll have to take the Kardassians channel, the National Quilting and Tatting channel, and three cartoon channels. Lots of people have channels they are paying for but have never ever switched on to!

So what the government is proposing, is for you to pick the channels you want, and pay for them individually. Which is what we all want. Seems totally reasonable. But this idea seems totally new to them.  More proof that they don't listen to the buying public when the old guys club is running things.

A great idea to me would be for you to take the Essential channels for a basic price, and then pay, say, a buck or two bucks per channel after that. And if the cable companies think they are losing money on that deal, you'd have to pick enough channels to make it profitable for your cable provider to operate. It might cost you the same, but you'd get something you're interested in watching!

Many of the small cable companies would welcome such a deal because it would allow them to cater to a certain demographic, a profitable group of TV watchers for them! And would allow the entry into the market of many specialty channels not offered presently!
And the general trend in TV viewing is to watch what you want on the internet or Netflix. The key here is that it is what you WANT!

But to many of us poor public, we are farced ... (Freudian slip) forced, to take those obscure channels that literally NO ONE watches. It was expressed recently by a cable adviser, that if 200 people want to see the Poodle Grooming Specialty channel, no one would pay to have it so it gets bundled. If you like the Total Violence and Mayhem channel, today you have to take Tree-Top Children too. So wouldn't a fair play be the one that forces those 200 people to watch brushing a dog on the web instead on mainstream cable?
The catering is backwards. And TV is generally worried because many thousands or even millions of people are now getting their TV from the web. Not good for TV advertisers. Corporations like NBC, CBS, ABC and basically all of them are wondering what the future holds for them?

Ah, but here's the rub: Joe Friendly wants to start his own TV channel, say about Funeral Home Families, call it Ted and Dead. But Joe needs to get his channel bundled to make a profit. So how does he go about getting the CRTC to add his channel to the lineup and cash in on bundling?
Hmm. Let's just say, just say ......
Mr. Joe Friendly approaches the Power Person in the business who can get things done, like a listing, the business being the CTRC, and Joe says, "What'll it take for me to get in on this cash cow?"
Power Person shrugs, "Oh it's so hard, there's no way."
"Way," says business savvy Joe Friendly. "What if I had a budget for getting a listing, say, $30,000?"
"How would that work, innocent Power Person asks?" A sparkle beginning to appear in his eye.
"Well,", say Joe, "if we were to get listed and bundled, it would guarantee us a sizable profit. And we ARE a generous company."
"Yes, indeed it would, Joe, even if no one watches your funeral homes and those who live within their cool walls."
"So you see then? I could put you on our TV channel studies panel. As an adviser. So it would be a totally legitimate transaction. An honorarium for your expertise.""Yes Joe, I do see, it would," and Mr. Power then inquires, "and how would that honorarium come about? "
Joe Friendly is quick to reply, "Old bills in a plain brown envelope."

"We'll bundle you with CNN, CBC, Ted Talks and the Walking Dead, how's that?"
"Perfect." 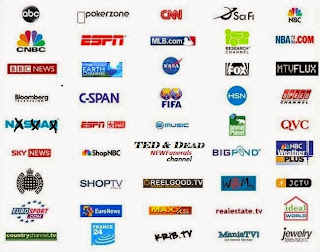 Of course, EVERYTHING is bundled with the NSA and CCTV these days too.
Meanwhile the Government is bundling up their propaganda for an election and helping the middle class seems like a good platform idea ... even if it's a lie and comes bundled with Harper, Trudeau and Mulcair.

Posted by HelloWall at 3:17 AM No comments:

Links to this post
Email ThisBlogThis!Share to TwitterShare to FacebookShare to Pinterest
Labels: Cable TV, CRTC, Pick and Pay.

Iraq, then and now - As forecast by many, in 2013 the internecine war continues, the Sunnis versus the Shiites, exactly as it was for centuries. An ongoing religious conflict. A war that Saddam Hussein had control of until his actual oil reserves were known and envious eyes landed on his desert sands.

Since the 2003 invasion of the country by US and UK forces the infrastructure has deteriorated to such a degree that it is estimated the country will need up to 1 TRILLION more (2013) to 'rebuild it's crumbling infrastructure and battered economy', said by the head of the National Investment Commission in Iraq. Doesn't the question come to mind as to what these non-bidding reconstruction companies like Haliburton, Kellogg, Brown and Root and Blackwater and others have been doing there for 10 years? These companies got a 1.5 billion dollar deal to rebuild the country.  All paid for by US taxpayers. Remember the original concept? The rebuild would come from Iraq oil sales.

In a March, 2013 final report to Congress,  Special Inspector General for Iraq Reconstruction Stuart Bowen's conclusion was all too clear: Since the invasion a decade ago this month, the U.S. has spent too much money in Iraq for too few results. And the Huffington Post reports that in nine years of war in Iraq, 4,448 Americans died and 32,221 were wounded in battle, leaving behind a deeply divided country steeped in corruption.

But in some cases, can we suspect there are handshakes all around and the feeling that they all made money. Why doesn't someone admit that was the plan all along?

The Iraqi people are no better now than 10 years ago and the American people are also a little poorer.

Read just a few news reports from the last 10 years to see how it unfolds, but not as it should -

Get rid of evidence - 2005
The Guardian Iraq

Where is the money going? - 2007
Nation Public Radio report

If you don't read any of the other links, a least read this one - from CBC News 2013 - The final report -
CBS News.com $60b to rebuild iraq wasted

Should children be scavenging for tidbits for survival?

Is this an endless scenario? Anyone with sanity would think no,
but the world has gone crazy, hasn't it?

Posted by HelloWall at 10:42 PM No comments: