Watch the video. Your own filter bubble is being built by someone else.

William Colby, former CIA Director,
"The Central Intelligence Agency owns everyone of any significance in the major media."

Zbigniew Brzezinski, former Carter National Security Advisor,
"The technotronic era involves the gradual appearance of a more controlled society. Such a society would be dominated by an elite, unrestrained by traditional values. Soon it will be possible to assert almost continuous surveillance over every citizen and maintain up-to-date complete files containing even the most personal information about the citizen. These files will be subject to instantaneous retrieval by the authorities."

Noam Chomsky, philosopher, activist,
"For those who stubbornly seek freedom, there can be no more urgent task than to come to understand the mechanisms and practices of indoctrination. These are easy to perceive in the totalitarian societies, much less so in the system of 'brainwashing under freedom' to which we are subjected and which all too often we serve as willing or unwitting instruments."

Joseph Goebbels, Nazi Propaganda Minister,
"It is the absolute right of the State to supervise the formation of public opinion."

“If you tell a lie big enough and keep repeating it, people will eventually come to believe it. The lie can be maintained only for such time as the State can shield the people from the political, economic and/or military consequences of the lie. It thus becomes vitally important for the State to use all of its powers to repress dissent, for the truth is the mortal enemy of the lie, and thus by extension, the truth is the greatest enemy of the State.”

Jacques Ellul, French philosopher,
"The goal of modern propaganda is no longer to transform opinion but to arouse an active and mythical belief."

Adolf Hitler, in Mein Kampf,
"All propaganda has to be popular and has to adapt its spiritual level to the perception of the least intelligent of those towards whom it intends to direct itself."

David Rockefeller, at a Bilderberg Meeting, 1991
"We are are grateful to The Washington Post, The New York Times, Time Magazine, and other great publications whose directors have attended our meetings and respected their promises of discretion for almost forty years. It would have been impossible for us to develop our plan for the world if we had been subject to the lights of publicity during those years. But, the world is now more sophisticated and prepared to march towards a world government. The supranational sovereignty of an intellectual elite and world bankers is surely preferable to the national auto-determination [read as 'democracy'] practiced in past centuries."

Sir Winston Churchill,
"Everybody is in favor of free speech. Hardly a day passes without its being extolled, but some people’s idea of it is that they are free to say what they like, but if anyone says anything back, that is an outrage."

Posted by HelloWall at 6:36 PM No comments:

We condemned the Taliban a few tears ago because they destroyed age old monuments in Afghanistan. They did this because those monoliths were more about Buddhism than Islam. Taliban militiamen wrecked the almost 2,000-year-old Buddhist masterpieces in the central province of Bamiyan, including the world's tallest standing Buddha measuring 50 meters (165 feet). 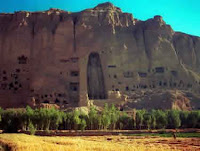 Afghanistan is home to an array of pre-Islamic historic treasures from its days as a key stop on the ancient Silk Road and a strategic battleground for conquerers dating back to Alexander the Great and the Aryans before him.

The two massive Bamiyan Buddhas, carved into a sandstone cliff near the provincial capital in central Afghanistan, were built around the second century.

Recently, the Nato organization confirmed that they will not hesitate to destroy ancient Roman ruins in Libya. Nato will bomb Roman ruins

"We will strike military vehicles, military forces, military equipment or military infrastructure that threaten Libyan civilians as necessary," a NATO official in Naples told CNN, declining to give his name in discussing internal NATO deliberations. But he said the alliance could not verify rebel claims that Libya's leader may be hiding rocket launchers at the UNESCO World Heritage site of Leptis Magna, a Roman city between the capital Tripoli and rebel-held Misrata. 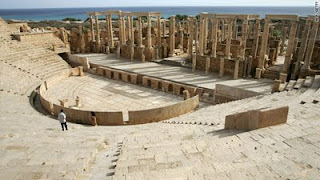 Leptis Magna is a Roman city between the capital Tripoli and rebel-held Misrata. The site is one of the most spectacular and unspoiled Roman ruins in the Mediterranean. It is a UNESCO World Heritage site.

The city appears to have been founded by Phoenician colonists sometime around 1100 BC. The town did not achieve prominence until Carthage became a major power in the Mediterranean in the 4th century BC. Then became part of the Roman Empire.

Isn't this the very same outrage those Western countries were so terribly opposed to in Afghanistan?

Just who is the bad guy here?