Is it True? department

Is it true that a man named Michael R. Taylor, who is Deputy Commissioner for foods at the US Food and Drug Administration (FDA) was once vice president for public policy for the Monsanto Company?
He is the first individual to hold the position, which was created along with a new Office of Foods in August 2009. But shouldn't being associated with Monsanto and considered a lobbyist automatically disqualify him from an important and influential post in food for American citizens? One sort of expected more of President Obama's administration.

It has been said that Mr. Taylor has written the rules regarding the inclusion of Genetically Modified Foods (GMOs) into the human food chain, and that they favor the Monsanto company products. Not to say Mr Taylor is up to anything bad, but if you're going to flock with a murder of crows you must expect suspicions.

The debate is just starting regarding GMOs and California is about to have a vote on a label notice regarding their inclusion in foodstuffs for public consumption. The public seems to be clamoring for information and it is said many companies will remove GMOs from their product rather than have to print the information on labels, so all is not black cloud, but people need to take interest and be aware!
Already there is research showing that injecting cows with Bovine Growth Hormone has dangerous effects on humans consuming that milk. Canada and Europe have banned the product.

It is all about our children, isn't it?
But the question remains: How does a former executive with a company such as Monsanto even have consideration for a position with the Food and Drug Administration?
The worried public are beginning to crow about things like that.
.
Posted by HelloWall at 7:29 PM No comments:

Links to this post
Email ThisBlogThis!Share to TwitterShare to FacebookShare to Pinterest
Labels: Coast to Coast am, GMOs. Monsanto.

You really need to read this

Shut Down the Web?

There is a protest going on today about censorship of the Web. You should already know the problem, if not, just Google - SOPA - and - PIPA - . The US Congress wants to end piracy of movies etc by websites. Even offshore if they are infringing US copyright.
At least that is the outward purpose. Some believe that certain politicians in America really want to control the media of the Web, for whatever purposes. The US Republicans who control the Senate want the legislation passed, and people like Rupert Murdoch are backing them. That should tell you something.

Google, Wikipedia (the fourth most visited website) Reddit, BoingBoing, Tucows, Identi.ca, are among many who have chosen to lodge their protests via blacking out their own websites or featuring a protest message! Others offering backing include Facebook, Twitter, Mozilla, Yahoo and eBay.

Shutting out companies that are offering pirated product could be done in other ways, without suppressing the internet servers totally. The Patriot Act and Homeland Security already have the capacity to infiltrate ISPs to get information about anyone. And without warrants. And without your knowledge. It is the law that your own ISP cannot even tell you they have downloaded information about you.
But it would take more effort to chase them down individually. Easier to punish everyone for crimes committed by the few.
The bonus is total control of media on the Web. This could be the true reason because most of those hawks of the right wing recognize the web as a most dangerous thing because of its ability of instant and uncontrolled communication.
That was proven long ago in Tianamin Square.

The RIAA, the Recording Industry of America got their way a few years ago, led by heavy metal band Metallica, because people were downloading copies of their, 'music'. We were all punished for that.
Yes its wrong but the result is that now every man, woman and child in North America pays a premium surcharge for BLANK tapes and blank CDs etc because you are deemed a criminal if you are purchasing these things and it is suspected by the RIAA that you will use them for the purpose of infringing copyright instead of paying for music. Even if you are buying them to record your grandchild's first words! The RIAA has had a huge windfall because of this collection of iniquitous fees.
(some would argue that the extra money you pay at the cash register to the RIAA is actually a licence to record whatever music you like, because that is why you are paying the fee)

So does it also mean that websites like NetFlix would have to charge more to every single subscriber because it would be assumed they are recording those movies for whatever reasons? And do you pay more at theaters because someone could sneak in a camcorder?

But then is it really about copyright infringement? Or is it another subterfuge step toward controlling what people hear, read and see on the Web.
A most dangerous place.

Dangerous for who though? 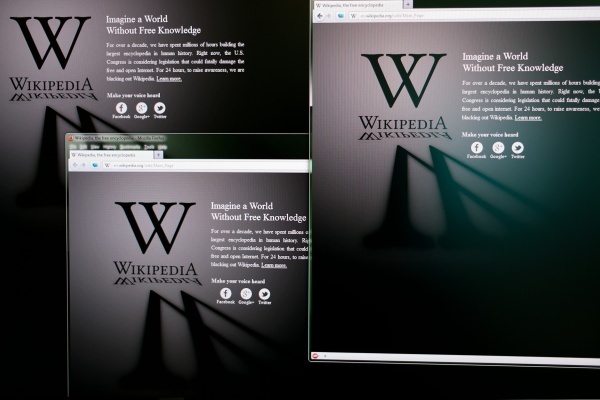 Success. Today, Jan. 20, the PIPA and SOPA anti-online privacy bills were halted by the US Congress after the Wikipedia protest! Although they have promised to continue to work at the bills and they are only a postponement for now. At any rate, it is a demonstration of how public opinion can change the direction of government. A huge win for freedom on the web.
.
Posted by HelloWall at 8:22 PM 1 comment: