World Trade Seven suicided
you must watch this

The term has come into colloquial use because hundreds of people have been suicided since 9/11, witnesses to something mostly, many by shooting themselves twice, some in the back of the head.

And you trusted BBC news too didn't you? Sure, we all did ... until that day. Click this link for the 'on the moment' coverage by BBC's Jane Standley and wonder about the link suddenly scrambling itself and wonder WHY it begins to scramble?


WT7 just sitting there?
watch this one too 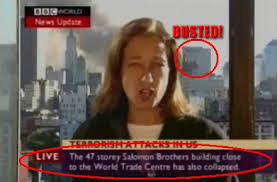 Is that an agenda or what? Do you still trust BBC news? These so-called news people people are being totally duped and controlled. Do you think someone was calling out in panic, "Oh no, it isn't down yet, kill that BBC feed!" Did BBC air their response before they were supposed to? What was the script for Jane, and when did she get it?

And you have the nerve to ridicule conspiracy theorists? hahaha.