The Freddie Gray death case again, this repost from Saturday, May 2, 2015 might be apropos to the current events as the jury was hung on the judgement of Baltimore Officer William Porter. You can follow the time-line yourself and make your own assessment of the happenings which led to this trial ......

On the death of Freddy Gray in Baltimore. See if you arrive at a conclusion by the timeline?
Have a look by the Google Earth map so you can see exactly where the events happened .... 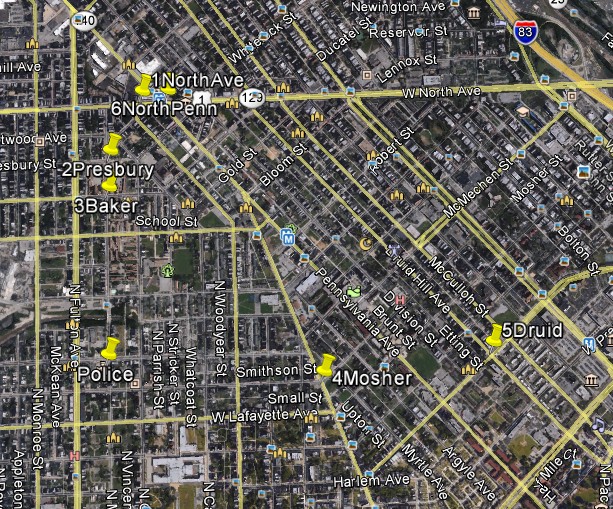 This will be simplified here ...7 points in all, one not included in the initial police report but discovered on private surveillance video later.
Starting with,
#1, 8:39 am. where officers, Lt. Brian W. Rice and Officers Edward M. Nero and Garrett E. Miller were on bike patrol near the corner of North Avenue and Mount Street. Lieutenant Rice made eye contact with Gray, who takes off running from W. North Avenue. He is chased and is caught by Officers Miller and Nero at,
#2,  8:?? am  Presbury St. and N. Mount St. This is where the TV video taken by bystanders shows him being put into the police van by several officers with hands cuffed. He is never belted in.
Then the police van drives only a block before stopping at,
#3, 8:46 am. Baker and N. Mount St. Where Officers Miller and Nero and Lieutenant Rice called Goodson to stop,  removed Mr. Gray from the van and placed him in leg restraints. Mr. Gray was loaded head first onto the floor of the van. Still not belting him in.
Q. were they actually planning to give Gray a so-called 'rough-ride' and wanted to put on the leg cuffs without the people one block away seeing them do it and taking more video? In that position it could be an extremely rough ride if the driver sped up and then jammed on his brakes several times, and from Gray's position, would result in him slamming helplessly into the bulkhead in his compartment, quite possibly breaking his neck?
Instead of going straight ahead for only another 4 blocks, to the police station, driver Officer Goodson instead travels southeast for about 10 blocks, maybe a half mile away to,
Q. Why did he drive far away from the police station if it wasn't to do a rough ride?
#4, 8:54 am. N. Freemont Ave and Mosher St. Where the truck stops again for the driver to 'check on him'. Gray still unsecured by a seatbelt.
Q. Was driver Goodson only looking to see what damage may have been inflicted on Gray at this time? He was supposed to continue to Central Booking with his prisoner who had said he needed a medic! Was Goodson in communication with other police and what were they instructing him to do?
But then he proceeds even farther away to stop at,
#5, 8:59 am. Dolphn and Druid Avenues. Officer Goodson radios for help to 'check his prisoner'.
Q. Did Goodson become worried after his previous check and saw that Gray was comatose, about to die, and needed help right away?
Officer William G. Porter arrived and he and Goodson went to the back of the van. Mr. Gray at that time requested help and indicated that he could not breathe and needed a medic. Porter helped sit Gray up on a bench but still never belted him in.
Q. Might a sudden hard braking while Gray was propped up on the bench in shackles result in even a harder fall? A spinal breaking fall?
Then a call came to pick up another man arrested way back at the original scene on North Avenue and N. Mount St. So Goodson drove there instead of to Central Booking even though it was obvious that Gray needed medical attention?.
#6, 9:?? am. Officers Nero, Miller and Porter. Sgt. Alicia D. White and Officers Porter and Goodson all observed Gray who was now unresponsive. No medical assistance was called for in spite of Gray's condition. The other prisoner is loaded into the left compartment of the police van.
#7, 9:24 am. Western District police station. A medic was called as Gray was not breathing, he was rushed to the University of Maryland’s Shock Trauma Center, where he died a week later.
The questions pile on. Why move Gray a block away out of sight of the gathering crowd with cameras to restrain him, but not belt him in? Why drive him so far away from the Police station when is was only a couple of minutes and a few blocks away? Then when the driver did check his passenger, Why continue driving away from his destination?  Then even again, Goodson went back to the original scene and the other officers were there with one passenger? Why did that passenger say he heard Gray thrashing and kicking when we now know he was not even breathing and was unable to kick or bang around?
Was that suggestion put into the 2nd prisoner's head by the now worried officers?
Did the 'rough ride' plan go terribly wrong and the police were then trying to cover the consequences of their actions?
Unfortunately, there is limited CCTV footage, some video from a private owner at a small grocery store that the police evidently copied, was stolen when the store was later torched during the riots.  Coincidence? Happenstance? Or enemy action?
Hmm? One might expect that there is much more private video out there, if and when it will turn up is anyone's guess.
It will unfold of course, but seems hard to change from the original time-line or the actions as already stated by the police who were involved.
You can use Google Earth yourself to actually follow the chain of events from Google Street View to get a feeling for the area and the environment of the people who live there. It is a sad event for all.
We expect there will be lots more WHYs to come.
----------------------------------------------------------------------

Stay tuned even though the procedures seemed to have changed from 'accidental' death in a police van to simply shooting people in their tracks while perceiving they were threatened with a weapon.
Ongoing.