This is what Prime Minister Harper said in the summer of 2012 when he dictated that our BC Coast Guard base on Kitsilano Point be closed - "the closing of a Vancouver coast guard station is in keeping with this government’s emphasis on public safety."  Is that a real comment? We are closing a public safety station help public safety? Is our Prime Minister living in a real world?

And they closed it in Feb 2013. The former base possessed a conventional vessel capable of responding to an oil spill, but the vessel was stripped for parts and sold after the base shuttered its operations. This reallocation is 'best for the public', they said.
The Coast Guard station would be moved to Richmond and serviced by one lumbering Hovercraft that takes over 30 minutes to get around Point Grey to be of any good to distress calls from English Bay. (in actuality it took over 3 hours!)
And there is another Station in Stanley Park that has an inflatable and would have the same response time going into Burrard Inlet, around Stanley Park and through Lions Gate before getting to English Bay. The very idea that the False Creek Station was closed indicates a lack of understanding about the Vancouver area geographics. Have the Feds ever even looked at a chart of this area? Their plan was “to put as many of the resources as we can into actually having rescue boats in the water. That’s where we put our investments going forward.” - Stephen Harper. Really?

In summer, and indeed, most of the year, we have hundreds of boats in English Bay, including these world traveling freighters. We are not the frozen port of Montreal or Halifax where people keep their boats moored for 10 months. Vancouver Coast Guard Kitsilano Station was the busiest base in Canada responding to more than 350 calls per year! And we have yet again seen the reaction from a Federal Government in Ottawa that has no idea what lies across the Rockies. And if they do know there is a thriving port here they choose to ignore us. Yet again. We wonder if they know there is an actual province out here! But then our BC votes don't actually count in Federal elections, do they? We think we needn't vote for Federal Conservatives in BC at all!

Cutting costs has resulted in a delayed response to our oil spill. If the Kitsilano Station was still open at the entrance of False Creek it might have taken 6 minutes to have a boat checking out that spill. As it was in fact, no one was active for 6 hours after the spill was detected. And the City of Vancouver was not told that our precious waters were fouled for 13 HOURS! And then when the Richmond Coast Guard was contacted they responded that 'we don't do oil spills!' 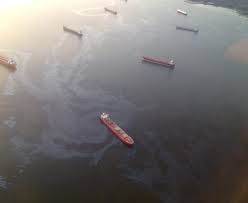 So now Vancouver Mayor, Gregor Robertson is telling that the response was inadequate and shows lack of leadership with the Federal and Provincial governments. We think he should be screaming bloody murder!  Christy Clark, our beloved Premier, covering her own ample ass, and stuttering away when asked what her government has done so far, says Mayor Robertson 'doesn't understand how the 'unified command works'.  How much do you need to know about a toxic oil leak contamination in our pristine waters?

Federal Industry Minister, James Moore, commenting from the high towers of Ottawa, says the spill is 80% cleaned up, but from aerial film, it looks like it is all over the English Bay, from Kitsilano to West Van beaches. Even into Georgia Straight. And it seems like 80% is the standard figure for media consumption. Moore says the West Coast people are making political jabs without having the facts. Nice deflection Moore, trying to make your critics seem political. We wonder what you can see of our waters from 3000 miles away? Does he forget he is an MP from BC?
Later a plane was flown over English Bay and it was announced that of 2700 liters of oil, there was only 6 liters left on the water! Yes, we all laughed at that audacity!

So we have people saving ducks on our shores.  We have agencies warning us not to swim in our water. Don't even touch it! Recently we had Orcas in English Bay, thrilling people everywhere. Humpbacks are nearby, our water is so clear and fresh. Now we have it spoiled. And the worst is yet to come when Prime Minister Harper pushes through the Northern Gateway oil pipeline and the Kinder-Morgan double pipeline to Burrard Inlet. And already those oil corporations have spun us with crap about how responsible they are. And how there is no danger to Vancouver area or our whole western coast.
And keep in mind folks, that bunker fuel oil, does evaporate. The Tars Sands Bitumen that Enbridge and Kinder-Morgan will be pipe-lining to tankers in BC, does not. Bitumen sinks to the bottom and can contaminate our waters for years, even decades! (Google Kalamazoo spill)

What'll happen now? Minister Moore is telling us the ship owners based in bankrupt Greece will pay for it all. Sure. You cannot sweep oil spills under the rug, because they tend to seep through. We bet the taxpayer will be on the hook for this one for lack of Federal leadership and the guts to enforce the paying of the bill. Business trumps everything in Conservative governments. And did you know that Exxon has still not paid the fines from the Valdez spill? Twenty-six years ago! Tied up in court while they fight it.
One other point - This was a brand new ship on its maiden voyage! The Matrathassa. And Enbridge is telling us about their tankers, they will be new too! Not reassuring is it?

What will it do to Vancouver's image? Do tourists want to come to a place where people are warned not to go near the water?  Do they want to sit on a beach with oil rings around the rocks? Or dead oily birds washed up?  Or black oil rings around the white yachts.  Or toxic smells wafting through the outdoor cafes? What does this do to the economy of the area?

What about the provincial government? Clark's stammering response tells you a lot, she just wants out of here, maybe another trade trip to India. Deferring to Mary Polak who is not sure about anything except who controls her paycheck.

Whatever happens in the next while, we need to pay attention. And see if the promises get followed through. We think Stephen Harper will simply tell media to stop reporting. And they will.
We think that appropriate action would be to refuse to elect toadies in the BC Federal Conservative Party that turn against British Columbians on the first plane to Ottawa. We need to punish them gravely. And what difference would it make to send other MPs to Ottawa? It doesn't make any difference now who goes there, why would we reward more Conservatives for incompetence?

And trusting Christy Clark and her BC Liberals with our beautiful city and coast is a non-starter, it is she who doesn't understand. The 'unified command' may be the people of BC. What can we expect from a Federal government that needs a Freedom of Information Act to reveal anything and a Provincial government that meets in secret parks and keeps no records?

This spill is only a starter and could be an omen of things to come. Does anyone still believe shipping companies can respond to a spill of bitumen in Burrard Inlet or the distant Douglas Channel from Kitimat?
You can take action, but you must have a memory of things when you go into that voting booth. That is where your power begins. Vancouver is a treasured jewel in Canada, and most of the people here think that way.  Get rid of those who don't understand.

And there is nothing political about asking you to toss out politicians who care little about anything but themselves.

They don't represent you at all.

Addenda: of the 2700 liters of bunker oil leaked, (somebody;s estimate) the Coast Guard is now telling us ONE day later that there is only 6 (SIX) liters left in English Bay.  Who is coming up with these ridiculous figures? Can we trust the Coast Guard to represent the truth? Something smells like fish oil to me!

Addenda #2 - The man on his boat who discovered the oil slick, called it in at about 5 PM The police helped get him through to the Richmond Station of the Coast Guard. He told them exactly what it was and how big the oil slick was and stayed in English Bay. When nothing happened he called them back at 5:30 and they told him the Coast Guard was already there. He waited. Called them back and said no Coast Guard, and was told they were 'on route'. He stayed and circled the area. The Coast Guard took over THREE HOURS before a boat appeared at about 9 PM.
So now we KNOW how long it take from Richmond to English Bay, 3 hours! The Kitsilano Station was minutes away had it still been there!
Time to toss out the indifferent Conservative MPs who are Harper Toadies and only represent the government TO YOU instead of representing you!
This is way too important to just vote these guys in again.

Addenda #3 - Secreted among the information in a desperately balanced Federal budget, was the information that they have now closed a SECOND Coast Guard Station at Ucluelet. Vancouver's marine communications and traffic centre is also slated to close on May 6 and the Comox station will close sometime next winter or spring. Vancouver traffic will be monitored via radar from Victoria, while Ucluelet will be monitored from a communications centre in Prince Rupert. The Federal Conservatives don't seem to even realize we are a coastal nation.